It’s the last day of the month, so I’ve spent the last few hours calculating how much funding was plowed into ed-tech startups over the last 30 days. There’ve been quite a few warnings in recent weeks that investment dollars are drying up, and I was expecting to see that the total amount raised in April had dropped precipitously.

(As always, the data I've gathered is freely available in the data folder of the GitHub repo that powers this site.)

Last minute news posted to Edsurge before I started my calculations – that a company named Odyssey had raised $25 million for a “content platform” by and for millennials (one that doesn’t pay its contributors… gee, that’s familiar…) – gave the final figure a significant boost:

About the asterisk accompanying that number: it includes the $100 million raised by Affirm, a private loan company. I know most publications do not include these investments as “ed-tech,” but I am tracking on the money going to these sorts of financial tech companies because they’re part and parcel of larger education trends. Affirm has deals with several coding bootcamps, for example, including General Assembly, Dev Bootcamp, and Hack Reactor. (Affirm acquired LendLayer last year in order to specifically target the education loan market.) You can’t fully understand what’s happening with education (technology) if you pretend like this financing trend isn’t happening. Indeed, some of the most well-funded education technology startups of the last year are in the business of offering private student loans: Social Finance raised $1 billion last year; Earnest raised $275 million. Investors might pay lip service to a disastrous “college bubble,” but at the end of the day, they’re still banking on people going into debt for more education.

If you strip out that $100 million for Affirm, April does look a lot more grim: The new, smaller figure of $100.6 million is down $30 million from March’s funding total. And March was down from February. And February was down from January.

2015 & 2016 Funding, Graphed, With and Without the Money for Student Loan Startups 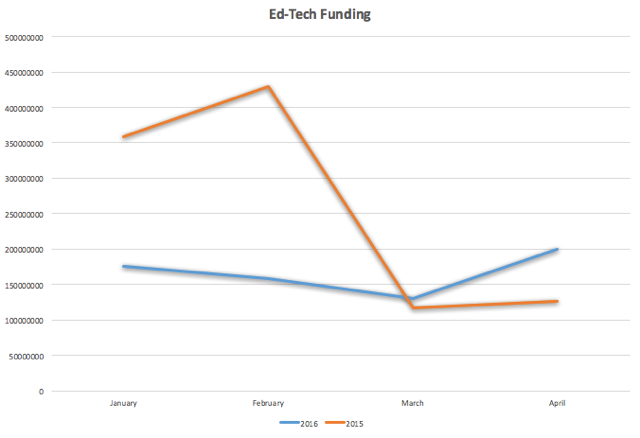 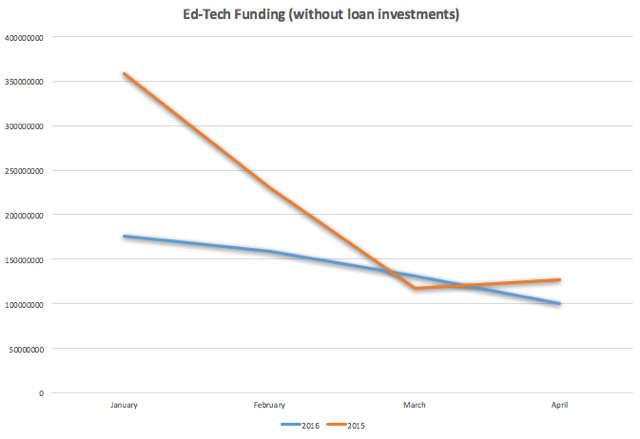 All told, there were 16 investments in April (17 if you count Odyssey). Again, for comparison: there were 13 in March, 15 in February, and 17 in January. There were 19 investments in April of last year. There were 9 acquisitions in April 2016, bringing the total to 38 so far this year. This time last year, there had been 34 acquisitions. There have been no IPOs yet this year – there were no tech IPOs at all in the first quarter of the year – although the for-profit university chain Laureate Education is waiting in the wings, having filed the paperwork to go public late last year.

So I don’t know if any of this spells “doom” for ed-tech startups or if it’s just a temporary “dip,” as Edsurge recently reassured its readers. I’ve been predicting that the startup boom would turn to bust for a while now; but I’m “ed-tech’s Cassandra,” so what else do you expect me to say.

Kin asked me today how the drop in funding for startups would affect schools, and I admit, I laughed – which is terrible of me.

I mean, it certainly matters if your school is VC-backed, like AltSchool (which I hear laid off a bunch of people in “operations” recently – so, like, teachers not engineers). Being fired sucks, and there’s a lot of job cutting occurring across the tech sector from what I gather. Some people will have “golden parachutes,” sure, but most won’t – particularly in ed-tech. I sure wouldn’t take a job at an ed-tech startup right now, no matter how much sponsored content Edsurge publishes pushing folks to do so. (And I definitely wouldn’t work or write for free.)

Without a doubt, some startups will fold; more will be acquired. The market will consolidate, with incumbent players – learning management systems, publishers, for-profit universities – striving to strengthen their positions. (The latter two have been very active buying up and partnering with coding bootcamps, incidentally.) To borrow from T.S. Eliot, this is the way the startup world ends, not with a disruption but a whimper.

What Kin meant with his question, I reckon, was how would a decline in ed-tech funding affect ed-tech in schools. We could look to the survivors of the last tech bubble bust for lessons, I suppose: learning management systems, publishers, for-profit universities all survived. We also could look at the products, pitched first and foremost to affluent parents, that investors still seem happy to back: tutoring and test prep. Tutoring, test prep, and student loans – these are the areas with the most investor activity, and these all underscore the powerful aspirational narrative surrounding education. (What does it mean, we should consider, to have this aspiration monetized and technologized?)

My advice to schools – whether funding is up or down, whether we're in the middle of boom or bust – remains the same: be wary of “free.” Raising venture capital is not a sustainable business model. Do not use products that extract, silo, and lock away student data and content. “The best” doesn’t always win in ed-tech. Think carefully about policies and practices that help reinforce that old saying “this is why we can’t have nice things.” (And maybe, just maybe, venture capital is part of the "why".)