Edsurge has also received a number of grants. Its Gates Foundation grants, for example, total $5.2 million. The Gates Foundation has also funded several of Edsurge’s investors, including NewSchools Venture Fund and Reach Capital.

(It’s worth noting: Edsurge also takes sponsorship dollars from the industry in order to research and write articles, as well as to appear at its conferences. This project is a work in progress, and I have not yet pulled all the data from the Edsurge website to assess who has sponsored content or conference booths.)

I’ve created a page on this site that list Edsurge’s investors, as part of my larger investigations into the financial, political, and social networks that are shaping education technology: The Edsurge Network.

I’ve been making note this year when Edsurge fails to disclose the ties it might have to investors and to investors’ portfolios it covers. (It happens a lot, but then again, almost every article would need a disclosure.) I’m going to stop writing about that here on this site, but I will continue to tweet about this with the @disclosedtech account. 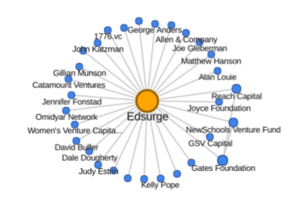 I’d really like to be able to graph some of the connections among investors, companies, people, products, policies, and PR, and I think that Edsurge has tried to position itself in the center of many of these conversations.